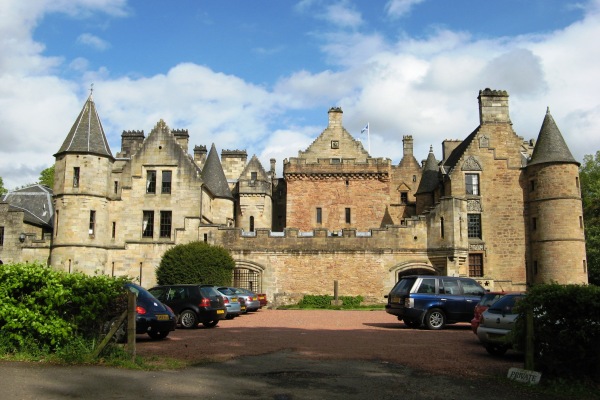 Close to the heart of Motherwell, Dalzell Estate is the perfect place to enjoy nature and history side by side.
Dalzell House is a historic house in Motherwell, North Lanarkshire, Scotland. It is located to the south of the town, on the north bank of the River Clyde. At its core is a 15th-century tower house, with extensive additions built during the 17th and 19th centuries.

In the 1980s the house was restored and divided for sale as eighteen private apartments, while the surrounding Dalzell estate is now owned by North Lanarkshire Council. The house is protected as a Category A listed building, and the grounds are listed on the Inventory of Gardens and Designed Landscapes in Scotland.

The 15th- or early 16th-century tower house was built by the Dalzell family, who acquired these lands in the 13th century. Thomas de Dalzell fought at the Battle of Bannockburn in 1314. Sir Robert Dalzell forfeited the lands in around 1342, for residing in England without the King's consent, but they were restored through marriage in the 15th century. Another Sir Robert Dalzell was created Lord Dalzell in 1628, and his son was further elevated as Earl of Carnwath in 1639.In 1645 the Earl of Carnwath granted the Dalzell estate to his nephew James Hamilton of Boggs, who built the first major extensions to the tower house, adding the south wing around 1649. By 1750, avenues of trees had been laid out in the grounds, probably the work of Archibald Hamilton, 4th of Dalzell. The 7th Hamilton laird, another Archibald Hamilton, entered into a venture with the reformer Robert Owen.

The grounds and their historical features have been the subject of significant recent restoration through a partnership between North Lanarkshire Council, Heritage Lottery Fund, RSPB Scotland, Historic Scotland, Scottish Natural Heritage and WREN, and more recently with the Clyde and Avon Valley Landscape Partnership to enhance the woodlands and restore St Patrick's Graveyard.

In 2014, the grounds of the estate were designated as a Queen Elizabeth 11 Jubilee Field in Trust, protecting the site from development for the use of the community.

Across the estate are five coloured way-marked routes that you can follow, each of varying length and taking in different aspects of the site. Highlights include historic Dalzell House, the Japanese Gardens, arboretum, mausoleum, Lord Gavin's Temple, and St Patrick's Chapel. The Covenanters Oak, near the main house, is probably the oldest living thing in North Lanarkshire.

Old age and bad weather have led to some damage in recent years, but work has been undertaken to preserve this mighty tree. Dalzell Estate also adjoins the RSPB's Baron's Haugh nature reserve, and the woodlands, grasslands and water of the estate and the reserve are home to an incredible variety of wildlife.