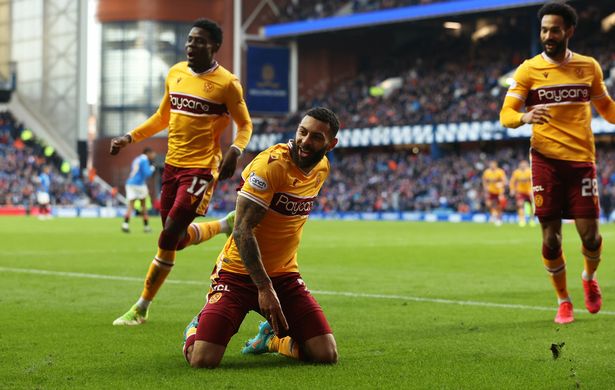 Graham Alexander was pleased with Motherwell’s battling performance to take a point from a 2-2 draw against Rangers at Ibrox, but warned his side can’t afford any more slip-ups.

With five games remaining before the split, Motherwell host Ross County on Wednesday and Dundee on Saturday, before a trip to St Johnstone on March 19.

The Steelmen entertain former boss Stephen Robinson’s St Mirren side on April 2, before travelling to Livingston in the final game before the split, and Alexander wants to gather as many polints as possible in those games.

But he says he was proud of his side for fighting back from a 2-0 deficit, with goals from Alfredo Morelos and Fashion Sakala, to bag a point after Kaiyne Woolery set one up for Jordan Roberts before netting the leveller with 20 minutes left.

Alexander told Motherwell’s website: “The players, to be fair, I thought they grew in stature in the second half. Once we got the goal I thought it gave them extra belief that they could get something.

“I want my players to have a bit more belief in themselves.

“We’ve shown already that we can compete against most clubs in this division, at home and away, and today was no different.

“That’s the target. We have to do that, we’re down to five games now before the split. To me this will only be a good point if we follow it up with positive results after it, that’s the truth of it.

“We’re down to the stage of the season where we can’t afford to drop points, and we have to try and win games, as many as we can to maintain this position that we’ve been in for a long time.”

Alexander added: “It’s not going to be easy. You see the teams we’re coming up against and everyone’s fighting for something. Most teams are winning games as well.

“I can see the performances, since we came back from the winter break we should have won more games than we have, the stats have shown us that.

“I won’t say we deserved to win today but we deserved a point out of it for our commitment, togetherness and discipline, but it’s getting down to the nitty gritty and we have to win.”

Alexander admitted that Rangers appeared to be so far ahead at the interval that few would have predicted a draw, but says Motherwell merited their point.

He said: “I’m proud of everyone, staff as well. It was those boys who got the team ready before the game and at half-time.

“I don’t think anyone would have been thinking we were going to get anything from the game, at half-time, 2-0 down to the champions, and you’ve seen the teams they’ve just beaten recently.

“But again we showed great spirit and togetherness to get back into the game, with two goals.

“We had to defend for our lives as you’re always going to do in games like this, and the lads put their bodies on the line.

“We changed the shape a little bit and came off them.

“I think we showed them a little bit too much respect, and they went 2-0 up in quick succession.

“It could have taken the wind out of our sails – it probably did for the rest of the half – but we made the three changes at half-time because we had to change the way the game was going.

“I think we had a bit more physical presence on the front areas, to enable us to get up the pitch when we could.”